View All Listed Properties in Greenwich

Greenwich is often referred to as the “Gateway to New England,” and is strategically located just 25 miles to New York City and the express trains make the Manhattan commute less than an hour. Greenwich is bordered by the flourishing City of Stamford on the east, New York’s Westchester County on the west and the waters of Long Island Sound on the south. Ultimately, it is the people who live here that make Greenwich so interesting and desirable. While widely known for its many wealthy residents such as business executives, international entrepreneurs, hedge fund managers, artists, writers, diplomats, actors and sports figures, Greenwich is a well diverse community and a wonderful place to live.

Chronologically, this is how our town has evolved:

Old Greenwich is where it all began. On July 18, 1640, the Siwanoy Indians, for the price of twenty-five English coats, sold the land that is now Old Greenwich to four Englishmen. One of the Englishmen, Jeffrey Ferris, named the area after his birthplace, Greenwich, England. As Greenwich developed to the west, Old Greenwich became known as “Old Town.” In 1872, the name was changed to Sound Beach at the urging of the New Haven Railroad, which preferred that name for its rail stop. So Sound Beach it stayed until 1930 when the area was renamed Old Greenwich.

Old Greenwich has evolved from a farming community to a summer resort to the quiet commuter community it is today. Residents of the village take a particular pride in their community with its special amenities: its intimate downtown shopping center; proximity to popular Greenwich point with its fine beach, park and public boating facilities’ and scenic Binney Park, where Little League baseball and soccer are regular weekend events and the annual model sailboat races on the pond draw many young would-be sailors.

As the Old Town farmers struggled with the area’s rocky soil, the tiny hamlet to the west prospered as a seaport. Cos Cob, originally known as Mianus, was named after the Siwanoy chief Mianos. It was an Englishman name John Coe, an early settler, who built a seawall at the mouth of the Mianus River and referred to it as a cob. He left in 1659, but the name Cos Cob (without the “e”) remained. Cos Cob flourished as a seaport during the 1700s and 1800s. At the turn of the nineteenth century, it evolved into an intellectual and artist colony, playing host to the likes of Eugene O’Neill, Willa Cather and Anya Seton, whose father, Ernest Thompson Seton, was a founder of the Boy Scouts of America. The historic Bush-Holley House, presently the home of the Historical Society of the Town of Greenwich, became famous as the residence and studio of the renowned Cos Cob School of American Impressionists, which included Elmer MacRae, Childe Hassam and John Twachtman. Today, Cos Cob has its own shopping center. The lovely Mianus River flows through its residential areas and there are extensive marinas on the upper Mianus Harbor.

In 1686 the tract of land between the Byram and Mianus rivers was traded by the Miossehasseky Indians for just thirty acres of planting ground elsewhere. Known then as Horseneck, it was the principal farming area of the town and supplied much of the produce for New York. The advent of the railroad in the mid-nineteenth century was an economic boon for central Greenwich, transforming Greenwich Avenue into the major shopping center it is today, with its many upscale stores and top-rated restaurants. Trademarks of the Avenue are the uniformed policemen who direct traffic every weekday. Central Greenwich is the hub of economic activity and the seat of town government. It is also where the main Greenwich library, Bruce Museum, Greenwich Hospital and many other town institutions are located. The central Greenwich area offers a wide range of residential opportunities, from apartments and condominiums convenient to shopping and public transportation to midcountry homes and the exclusive waterfront properties in Belle Haven and Mead Point.

This tiny mill town in western Greenwich was founded in 1774 by Baptist settlers, who established their church by the Byram River. Its industrial history began with a mill for grinding Peruvian bark into patent medicines. Later, the American Felt Company turned out the majority of felt for hats in the United States. It operated until the mid-1970s. Restaurants, office space and condominiums now occupy the mill, noted for its scenic millpond and waterfall. There is also a small shopping area for everyday needs.

Known as Mianus Neck until 1870 Riverside was predominantly a community of farmers, fishermen and oystermen. Until the middle of the 19thcentury, Riverside Avenue was known as the Potato Road for all the potato cellars near the cove. Today, it is one of the most desirable of our suburban communities. It is closely linked to neighboring Old Greenwich, and its abundant stretch of waterfront on the river, harbor and Long Island Sound attracts those who have a particular interest in living near the water and in sailing and fishing. Like Old Greenwich, its location near a railroad station makes it ideal for commuters to the city.

Tucked into the southwest corner of town, Byram was settled in 1660 by Thomas Lyon and was originally known as New Lebanon. Today, Byram is a diverse residential community. Beautiful shorefront estates with dramatic views of the Sound are backed by more modest residential properties in the rest of the village. Together with neighboring Port Chester across the Byram River, there are any number of fine restaurants featuring a variety of ethnic cuisines plus retail shops of every kind. An ongoing program revitalizing properties along the shores of the Byram River and Byram’s central business district is giving this Greenwich enclave a decidedly up-and-coming future.

Banksville was named after Samuel Bankes, who settled on the upper reaches of the Mianus River in the northeast corner of Greenwich in 1700. For the next 200 years, it was a quiet farming community, but in 1904 Edmund Converse acquired more than 1,000 acres to create Greenwich’s greatest estate, with forty buildings and a staff of 200. Farming operations continued up until 1960, after which time it lay fallow for twenty years until it was sold to the Conyers Farm Partnership and its then 1,468 acres were subdivided into sixty lots. Conyers Farm is the home of many well-known residents who can afford its magnificent ten-acre lots. It is also the locale for the Greenwich Polo Club, where many town residents go in the summer to enjoy the polo games on a Sunday afternoon. (An interesting sidelight: Conyers Farm would not exist nor would most of backcountry Greenwich be the same if a proposal in 1945 to locate the headquarters of the United Nations here had not been defeated by an alarmed group of Greenwich citizens.)

Banksville’s small business center near the New York State line is reminiscent of a simpler time. Many of its residents refer to Banksville as the land that time has forgotten.

The Backcountry and Midcountry

Any description of the unique areas of Greenwich wouldn’t be complete without mention of the extraordinarily beautiful midcountry and backcountry that encompass nearly two-thirds of the town’s geography. Four-acre zoning is the rule in most of the backcountry area, defined as north of the Merritt Parkway, while one- and two-acre zoning is most common in the midcountry to the south.

Thanks to preservation efforts by the Greenwich Land Trust and the generosity of a number of Greenwich property owners, there is still a remarkable amount of open space remaining, especially in the back country. The area is characterized by a diversity of rivers, lakes and ponds, winding country roads, woods and meadows, and scenic glacial carved gorges- enough to please the eye of the most ardent environmentalist.

Here is where most of the town’s golf courses and many of its parklands are found, including the Audubon property with its impressive headquarters and the Kimberlin Nature Education Center. Perhaps most surprising, this is all within thirty-five miles of Manhattan. 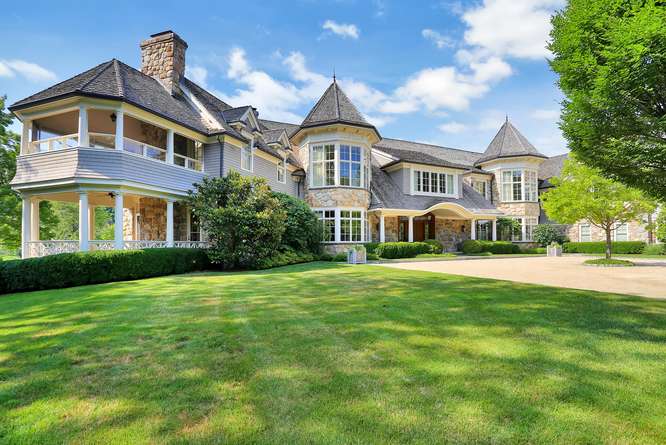 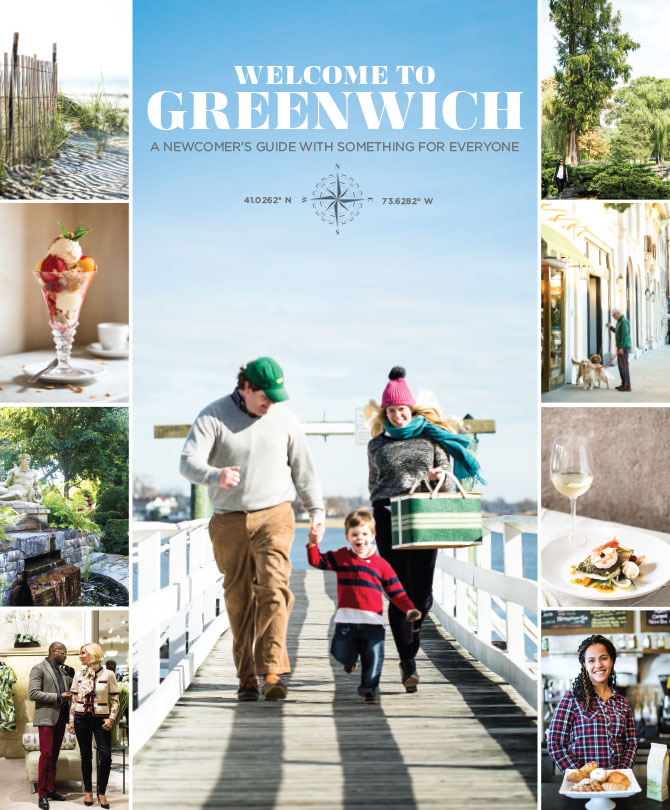